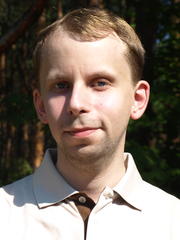 I am a historian and epigraphist of the late antique period. My research interests focus on the use of inscriptions as an instrument of the cult of saints in Anatolia and the Middle East between the fourth and the mid-seventh century. I am also making preparations for a new project on the language choice in the private and public monumental epigraphy of the early Byzantine Middle East.

In 2010, I defended my MA thesis in general history, titled ‘The Roman administration of Cyprus (58 BC – AD 284)’, and written under the supervision of dr hab. Paweł Janiszewski at the Institute of History of the University of Warsaw. Between 2010 and 2015, I was a doctoral candidate at the Department of Papyrology of the Institute of Archaeology of the University of Warsaw. At that time I was also the PI of the research project „Epigraphic patterns applied in the cult of saints in late antique/early Byzantine Asia Minor” funded by a Preludium grant of the National Science Centre, Poland, and a holder of scholarships of the Foundation for Polish Science (Start 2013) and of the Alfried Krupp von Bohlen und Halbach Stiftung. This funding allowed me for short research stays in Germany (at the University of Cologne, and at Das Deutsche Archäologische Institut in Munich), and in Belgium (KU Leuven). In 2015 I defended my dissertation ‘Facets of the Cult of Saints in Asia Minor. The Epigraphic Patterns prior to the 7th c. AD’, written under the supervision of Prof. dr Adam Łajtar.

Between 2015 and 2018 I worked as a research associate (post-doc) at the University of Oxford, on the project ‘The Cult of Saints in Late Antiquity’ funded by an ERC-Advanced Grant, and led by dr Bryan Ward-Perkins. Since 2018 I have been holding a lectureship in ancient history at the Department of Ancient History of the Institute of History at the University of Warsaw, where I offer classes in the history of ancient Greece and Rome for undergraduate students, and classes in the history of the Late Roman East for graduate students.

Organization of scientific meetings:
2013 Secretary of the Organising Commitee of the 27th Congress of Papyrology (29.07.-03.08.2013, University of Warsaw, Poland), number of participants: ca. 300 speakers.

Institutional responsibilities:
2013 – 2014 Executive assistant to the head of the project: Exhibition and Conservation of Papyri from the Raphael Taubenschlag Library funded by a grant awarded by the Polish Ministry of Science and Higher Education to the Raphael Taubenschlag Foundation, Poland. Management of a team including a conservationist restoring the collection, a DTP team preparing the exhibition, and of researchers reading and commenting on the texts preserved on the papyri.
2014 Co-organiser of the exhibition: The Egyptian sands speak (not only) Greek at the Archaeological Museum in Cracow, Poland.
2013 Co-organiser of the exhibition: Voices from the Nile Valley. Polish Archaeology from Alexandria to Dongola during the 27th Congress of Papyrology; at the Old Library at the University of Warsaw, Poland.
2018 Contact person and student advisor for the first year of undergraduates in general history and Jewish studies at the Institute of History, University of Warsaw, Poland.
2018 Member of the Research Council of the Institute of History, University of Warsaw, Poland.

Major international collaborations:
IV–V 2019 Participant at the Workshop on Digital and Practical Epigraphy (April 29–May 4), organized at    the Institute of Classical Studies (School of Advanced Study, University of London) by Gabriel Bodard (ICS) and Katherine McDonald (Exeter University), co-funded by an AHRC Early Career Leadership grant „Connectivity and Competition”.
XI 2018 Short research stay at the Centre d'études supérieures de civilisation médiévale (CESCM), University of Poitiers, France. Epigraphic survey of the archive of Nancy Gauthier, Marie-Hélène Soulet, and Luce Pietri, regarding the cult of saints in late antique Gaul. Funded by an ERC-Advanced Grant (the ‘Cult of Saints in Late Antiquity’).
IX 2018 Invited participant of the Summer Programme in Byzantine Epigraphy at Koç University         Research Center for Anatolian Civilizations (ANAMED) Istanbul, Turkey, organized by Ida Toth (University of Oxford) and Andreas Rhoby (Österreichische Akademie der Wissenschaften).    Funded by the Koç University’s Stavros Niarchos Foundation Center for Late Antique and Byzantine Studies, and the Oxford Research Centre in Byzantine Studies.
2018 External contributor to the volume Current Approaches to the Materiality of Texts in Greco-Roman Antiquity. Proceedings of the AIA/SCS Meeting in Boston edited by Erica Angliker (University of London, Institute of Classical Studies) and Ilaria Bultrighini (University of London, Institute of Classical Studies).
2017 – 2018 Cooperation with Mustafa Adak (Akdeniz University, Antalya, Turkey): Edition of 13 unpublished middle Byzantine Greek inscriptions from Bithynia (north Asia Minor).
III 2017 One-week research stay at the epigraphic archive of the Byzantine department of the National and Kapodistrian University of Athens, and at the Benaki Museum. Funded by an ERC-Advanced Grant (the ‘Cult of Saints in Late Antiquity’).
2016 – 2017 Cooperation with the Princeton Euchaita/Avkat Project, led by John Haldon (Princeton University, NJ, USA) and Hugh Elton (Trent University, Canada). Edition (together with Frank Trombley†) of seventeen Greek and one Latin inscriptions, found during the archaeological survey of Beyözü and nearby settlements in Pontus, north Asia Minor.
2016 – 2017 Cooperation with the School of Archaeology (University of Oxford): surveys of unpublished squeezes of inscriptions and archaeological reports from North Syria, kept in the archive of Georges Tchalenko.
2016 – 2017 Cooperation with the Centre for the Study of Ancient Documents (University of Oxford): surveys of unpublished squeezes of inscriptions and archaeological reports from central Anatolia, kept in the ‘Calder – Ballance archive’.
2016 Collaboration with Klaus Hallof (Humboldt University, Berlin; the Inscriptiones Christianae Graecae Project sponsored by the Excellence Cluster 264 Topoi) regarding the edition of an unpublished squeeze from the archive of the Inscriptiones Graecae (Die Berlin-Brandenburgische Akademie der Wissenschaften).
2015 – 2018 Three-year postdoctoral fellowship at the University of Oxford, UK (full time job). Funded by an ERC-Advanced Grant (the ‘Cult of Saints in Late Antiquity’).
V 2014 Two-weeks research stay at the libraries of the KU Leuven (Belgium) funded by my NCN grant (Preludium 3).
XI 2013 One-month research stay at the Library of the Kommission für Alte Geschichte und Epigraphik (Das Deutsche Archäologische Institut, Munich, Germany) funded by an NCN grant (Preludium).
2013 Cooperation with the editor of the corpus of inscriptions of Paphos (Cyprus), Jean-Baptiste Cayla (Université Paris-Sorbonne, Paris-IV), concerning the finds of the Polish archaeological mission.
X – XI 2011 Two-months stay and participation in the seminar meetings: Zentrum und Peripherie im Imperium Romanum held by Prof. dr. Walter Ameling (University of Cologne, Germany). Funded by the Alfried Krupp von Bohlen und Halbach scholarship.

Accepted for publication:
1) ‘And the Word was made flesh. Greek, Syriac, and CPA inscriptions as substitutes for the physical presence of benefactors in Eastern Christian sanctuaries. A study on the ecclesiastical space in the 4th – 7th c.’, [in:] I. Bultrighini, E. Angliker (eds.), Current Approaches to the Materiality of Texts in Greco-Roman Antiquity. Proceedings of the AIA/SCS Meeting in Boston (Brepols).
2) 'Pilgrims and seafarers: A survey of travellers' graffiti from the Aegean Islands, Cyprus, and the Ionian Coast', in: A.E. Felle, B. Ward-Perkins (eds.), Proccedings of the conference: Cultic Graffiti across the Mediterranean and beyond (Brepols: Bibliothèque de l'Antiquité Tardive).

Freely accessible databases:
The 'Cult of Saints in Late Antiquity' database: for the moment c.950 records resembling dictionary entries on the inscriptions documenting the cult of saints in the Mediterranean (in Greek, Latin, Syriac, and Old Arabic), see http://csla.history.ox.ac.uk/

Talks at international conferences and seminars:
March 2019: Conference: The Cult of Saints in late antique Anatolia, 11 March 2019, Trinity College, Oxford. Talk: ‘Saints and statistics in Anatolia (and beyond): making sense of aggregated epigraphic data’.
November 2018: The epigraphic seminar SEMPER 22/11: L’épigraphie en mouvement (University of Poitiers, France), convened by Estelle Ingrand-Varenne. Talk: ‘The Cult of Saints project: the Greek and Latin epigraphical evidence’.
June 2018: Conference: Women and Pilgrimage in the Ancient and Pre-Modern World (organizers: Marlena Whiting, Emilia Salerno), University of Amsterdam, Netherlands Organisation for Scientific Research [NWO]). Talk: Facing death abroad. Epitaphs from pilgrim shrines as a potential source for the study of women’s pilgrimage in late antique Anatolia in the panel Research Avenue 3: Methodological innovations. Challenges of ‘recovering’ women from the historical record and the contributions of other fields such as archaeology, epigraphy, art history, anthropology, sociology of religion, etc.
May 2018: Conference: Unguentarium. A terracotta vessel form and other related vessels in the Hellenistic, Roman, and early Byzantine Mediterranean. An international symposium (Izmir Center of the Archaeology of Western Anatolia, Dokuz Eylül University, Turkey). Talk: Pilgrims’ ampullae, reliquaries, and the use of holy oil in the late antique Mediterranean.
March 2018: Late Roman Seminar (conveners: Neil McLynn and Conrad Leyser), University of Oxford, UK. Talk: Constantine and the translation of relics to Constantinople: Further remarks on a recently published inscription from Ephesos.
September 2017: Conference: Cultic Graffiti across the Mediterranean and beyond (organizer Antonio Enrico Felle), Univeristy of Bari, 'Aldo Moro', Italy. Talk: Pilgrims and seafarers: a survey of travellers' graffiti from the Aegean Islands, Cyprus, and the Ionian Coast.
July 2017: Conference: International Medieval Congress 2017, Leeds, session: Relics at the Interface between Textuality and Materiality, c. 400-c. 1200, panel II: Inscribing the Relics (organizers Elisa Pallottini, Utrecht University, Janneke Raaijmakers, Utrecht Univeristy, and Julia Smith, University of Oxford). Talk: Ossa loquuntur: Labelling reliquaries and the transmission of the communal memory of martyrs in late antique Anatolia and the Near East.
May 2017: the epigraphic seminar of the Faculty of Theology, Humboldt University, Berlin (conveners Cilliers Breytenbach and Klaus Hallof). Talk: The Greek and Latin inscriptions from the village of Beyözü (Pontus) and neighbouring settlements.
March 2017: the epigraphic seminar of the Centre for the Study of Ancient Documents (conveners Peter Thonemann and Charles Crowther), University of Oxford. Talk: A new imperial letter from the Ephesian dossier.
Januay 2017: Late Antique and Byzantine Art and Archaeology Seminar (convener Ine Jacobs) University of Oxford. Talk: Reliquaries of Suganeh in the Limestone Massif (North Syria). New evidence from the Tchalenko Archive.
December 2016: Conference: Tell me your name: Labeling status in Graeco-Roman world (organizer Maria Nowak) Faculty of Law and Administration, University of Warsaw. Talk: ‘And there, unworthy as I was, inscribed the names of my parents: the family identity of supplicants in pilgrims' graffiti from the late antique and Byzantine East.
May 2016: Conference: Rulers and Saints. Concepts of ‘dynasty’ and ‘sanctity’ from Late Antiquity to the Late Middle Ages (organizers: ERC-SG project ‘Jagiellonians’, supported by the Oxford Medieval Society and the Sanderson Fund Workshop), University of Oxford. Talk: Epigraphic manifestations of an early dynastic discourse. Anicia Juliana, Justinian, and the building inscriptions of the churches of St Polyeuktos and Sts Sergios and Bakchos in Constantinople.
March 2016: Conference: 49th Spring Symposium of Byzantine Studies: Inscribing Texts in Byzantium: Continuities & Transformations. Exeter College, Oxford. Referat: Inscriptions as an instrument of the cult of saints in late antique and middle Byzantine Anatolia.
June 2016: The Cult of Saints Seminar (convener Efthymios Rizos), University of Oxford. Talk: Epitaph for a saint: Considerations on the epigraphical aspects of the burial of martyrs.
March 2013: Conference Die Christianisierung Kleinasiens in der Spätantike (organizer Walter Ameling), University of Cologne, Germany. Talk: Diffussion and functions of the cult of saints in Asia Minor (the epigraphic evidence).

5. Prizes/Awards:
2018: The 2018 EKVAM Annual Award of the Ancient Anatolian Studies for contributions to Byzantine epigraphy, in particular the book Inscribing the Saints in Late Antique Anatolia. Awarded by the Research Center for the Archaeology of Western Anatolia – EKVAM (Izmir, Turkey).
2007: First prize in a competition for the best student historical essay written at the Faculty of History, University of Warsaw in 2005/2006.