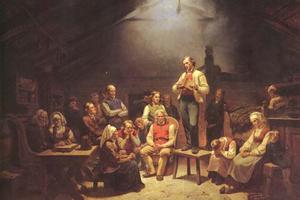 19th century revivalism movements appeared as a contestation and an alternative to official state churches and - in specific circumstances - an illegal form of religious activity in Scandinavian countries. It’s origins were connected with the idea of pietism, a religious movement within the protestant churches at the turn of 17th and 18th centuries, which aimed at a deep reform of Nordic Lutheranism. One can also point at Moravian herrnhutism (the Zinzendorff movement) as an important inspiration, especially for Danish and Norwegian revivalism.
As the revivalism movements in Scandinavia were mass movements within agrarian societies, the main research objective is to observe changes of social structure, social mobility, social and political activity, shaping of the national identity (especially important in case of Norway and Finland), emancipation of women.
The research hypothesis refers to the key role and the importance of the revivalism movements in  the process of modernization of Scandinavian societies in 19th century, their impact on the civic society as a whole and growth of national identity as well. The project focuses also on the importance of revivalism movements for modern Scandinavian culture, as it formed during 19th century many cultural phenomena and features of Scandinavian mentality, easily to be traced in 20th century Nordic literature and films. And last but not least, the religious movements were the main component of various Scandinavian social and political movements as they formulated a common programme and aim of their activity, and a common opponent, what gained the movements a massive support. The main hypothesis is based however on the assumption that the proper understanding of particular revivalist movements in Denmark, Norway, Sweden and Finland, their origins and individual features is possible only if compared with each other. The last part the project gets into the debate on the origins of the Scandinavian welfare state: most of its participants do admit  that Nordic Lutheranism played a great role, but that one of the revivalism had not been discussed. My hypothesis refers to its key role in that process.