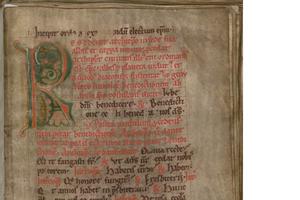 The project, being a continuation of a long history of studies on the formation and development of Polish culture in the Middle Ages, is meant to, on one hand, supplement this field with research on hitherto unexplored subject matter, and on the other, attempt to reevaluate the current state of knowledge by using a new theoretic approach. The question at the centre of these studies concerns the extent to which Polish culture of the Piast period, in its two key, interconnected aspects, political and religious, can be treated as an original entity, and to what extent it arose simply as a copy of Latin Christian culture, adapted to local conditions and circumstances.
​
Studies on the political and religious culture of Medieval Poland in a comparative perspective have until now been based on the belief that our country was culturally close to the circle of Latin culture - however, they have been lacking a deeper reflection on the scope of these similarities. Their unspoken assumption was that the culture of Poland, and other, recently Christianized countries of the region, copied models from the West in a way true to the original, only tailored to local possibilities. The functioning of various models of reception in these countries is a question rarely raised, as is that of the extent to which the arising cultural reality was the result of a meeting of foreign and local models, giving rise to an original culture.
​
The proposed analysis of selected phenomena of Polish political and religious culture, as well as analogous occurrences in other countries of the region and Western Europe, gives us, first of all, a chance to notice similarities and differences between centre and periphery, as well as similarities and differences in the absorption and adaptation of models coming from the centre in various peripheral areas, and possible cultural movements in the opposite direction. The aim of this analysis is not, however, only to note the above observations, but rather to answer the fundamental question of the degree to which they are unique and original, and to which secondary and typical for the rest of the Latin world. The effect will be a wide perspective on Polish culture of the Piast period seen in the context of the contemporary culture of the region and of Latin Christian Europe.