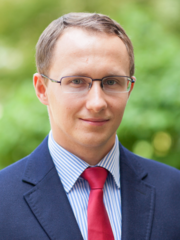 Paweł Figurski is an Assistant Professor at the Institute of History, University of Warsaw. His research focuses on the history of political-theological thought in medieval Europe, and on the implications of that history for debates in contemporary political theology.
Particular interests include the history of religious legitimization and contestation of royal power by means of Church liturgies and Eucharistic theologies (see the finished project funded by the Polish National Science Center), the relationship between liturgy and politics (see the academic society PSALM-Network), the influence of modern political ideologies on historical scholarship, and the phenomenon of sacralization of political power both in premodern Europe and contemporary societies (see the finished project funded by the Polish Ministry of Science and Higher Education).
Figurski is the author of a dissertation entitled: Prayers for a King in the Roman Canon of the Mass. A Study in the Early Medieval Political Theology in Latin Christianity, which he wrote under the supervision of Prof. Roman Michałowski and defended at the Department of History, University of Warsaw. In his thesis, which he is preparing for publication, Figurski surveys the history of the exceptional prayers for kings during the Eucharist and their importance for the sacralization of kingship in early medieval Europe, based on the analysis of over four hundred liturgical manuscripts. The dissertation provides statistical research on the dissemination of these prayers in the Latin liturgy throughout Europe and it focuses on specific ecclesiastical centers and figures by analyzing their causes for accepting or rejecting the tradition. His thesis questions generalizations about the desacralizing period of the so-called Gregorian Reform as contrasted with the sacralizing Ottonian and early Salian Church, and proposes that sacralization and desacralization seem to be less static characteristics of any one period, but rather dynamic interplays between various individual networks, and vivid relationships created through varied and individual negotiations.
Figurski received his M.A. in history at the Institute of History, University of Warsaw (2011), MTS (Master of Theological Studies) at the Department of Theology, University of Notre Dame (2017), and PhD in history at the Department of History, University of Warsaw (2016). He has been awarded fellowships by the Fulbright Commission, Sonderforschungsbereich 496 (in Münster, Germany), the Foundation for Polish Science (FNP START), and Rome Global Gateway. He has also been a Fellow at Collegium Invisibile (collaboration with Grażyna Jurkowlaniec, Hagen Keller and Peter Jeffery), a Garstka Fellow at the Department of History, University of Notre Dame, and a Fellow at the Notre Dame Center for Ethics and Culture.
His current book project, provisionally entitled Dangerous Prayers for Rulers: A Case Study in Medieval Political Theology furthers the research of his dissertation exploring the liturgical roots of medieval political theology and influence of the Eucharist on political culture throughout the European Middle Ages. Moreover, within the grant OPUS of Prof. Michałowski he is analyzing Polish liturgical sources (until ca. 1300) in order to include this overlooked material into the narrative on political, social and religious history of medieval Polish culture (see the project funded by the Polish National Science Center). He enjoys teaching (many courses already taught both at the University of Warsaw and University of Notre Dame), swimming and watching soccer.

Representative Papers delivered at the Conferences:

07/07/2017 – Universität Regensburg – Gottesdienst in Regensburger Institutionen Zur Vielfalt liturgischer Traditionen in der Vormoderne. Paper entitled: "Regensburg Prayers for Rulers in the Roman Canon of the Mass. An Insight into the Broader Phenomenon."

05/12/2017 – Western Michigan University – 52nd International Medieval Congress. Paper entitled: "Conflict over Prayers for the Rulers in the Roman Canon of the Mass during the so-called Gregorian Reform."

04/01/2017 – Westfälische Wilhelms-Universität in Münster – Ritual and Historiography in the Middle Ages. Paper entitled: "Prayers for Rulers in the Roman Canon of the Mass and the so-called Investiturstreit."

07/06/2015 – University of Leeds – International Medieval Congress. Paper entitled: "Liturgical Prayers for Rulers in the Roman Canon of the Mass: Origins of an Overlooked Tradition and Its Consequences for Medieval Political Theology during Reforms of the Church."

04/10/2015 – Princeton University – Rulers, Kingship, and Legacies of Power. Paper entitled: "Forging Consensus on Sacral Kingship. Evidence from the Prayer for the Ruler in the Roman Canon of the Mass ("Te igitur clementissime Pater")."

date of entry: September 2017
Updated information on the website: https://uw.academia.edu/PawełFigurski