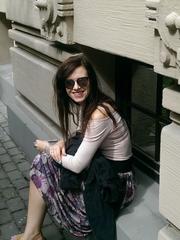 I was born in 1981 in Warsaw. I got my MA in Classics in 2006, at the Universit of Warsawy; BA in Polish Philology in 2009; University; PhD in Classics 2012, all of them at the University of Warsaw. I wrote my doctoral dissertation titled Phlegon’s Monstrous World. The Role of Monster in Phlegon of Tralles’ ‘Mirabilia’ and in the Culture of his Times under the supervision of Professor Wlodzimierz Olszaniec (University of Warsaw) and Professor Emeritus William Hansen (Indiana University of Bloomington). I conducted my doctoral studies also at the University of Sorbonne (Paris IV) and Indiana University in Bloomington, IN, USA. In 2013-2017 I worked as Assistant Professor in the Institute of Classical Philology at the University of Silesia in Katowice. From October 2017 to December 2018 I was employed in the “Cult of Saints in Late Antiquity” Research Project (ERC Advanced Grant) under the supervision of Professor Robert Wiśniewski (University of Warsaw) and Professor Bryan Ward-Perkins (University of Oxford). I am currently conducting a research project on the Epiphanies of the Saints in Late-Antique Greek Literature (Sonata grant, funded by National Science Centre in Poland). I was granted several scholarships, including Fondation Hardt pour l'étude de l'antiquité classique in Vandoeuvres, Switzerland (March and September 2017) and Lanckoronski Foundation Research Scholarship in London (2010 and 2017). Since 2017 I have been a member of the International Plutarch Society.